Elkhorn south is a big school with a lot of kids. With that comes a variety of cars, ranging from a car before 2000 or a brand new Tesla. Looking at the Elkhorn South parking lot represents about how many personalities go to the school.

“Ever since I have worked on small engines on tractors when I was young with my dad, I became more and more into cars,” Junior Nathaniel Robinson said.

Nathaniel just started immersing himself  into modifying his Ford F-250.

“I would love to put new wheels and tires on my truck and then it would officially be my dream car,” Robinson said.

Sphmore Jace Ksywonis one of the many jeep owners at our school, put 4 modifications on all by himself and he is all about putting more on.

“Ever since my brother started driving it really sparked my interest in cars and once I finally got my school permit and my jeep, I was all over the idea of putting modifications on it,” Kshywonis said.

“It really makes my jeep stand out from other jeeps in the lot,” Kshywonis said.

Robinson and Kshywonis both believe their interest in cars might have sparked interest in different career paths than they originally thought of.

“Once I join the military I was thinking now that I will most likely pursue a career in mechanics,” Robinson said.

“I believe that once I really started doing my modifications it made me want to do something in the future that doesn’t involve a boring office job-something more hands on with cars would be a thrill,” Kshywonis said.

Kshywonis also began to talk about how cars can hold a lot of personality.

“When I look at someones car, it is more to me than just a car, it is a status symbol and can definitely show what kind of person you are,” Kshywonis said.

Both boys have modified their cars with jobs that can take up at least a day of work.

“I have done many things to my jeep. I have put different fenders, different rims, lifted the car, and lastly put a fender flare on,” Kshywonis said.

While Jace and Nathaniel’s cars are much different from each other both of them have put a lot of work into their cars. Jace has done more to his jeep than Nathaniel has done to his truck, but both have the same passion and love for their cars.

“I have tuned my car and that is about it and it has greatly improved the performance of the engine,” Robinson said.

The respective cars each reveal some personality of the owners. For example, Kshywonis has a more country looking jeep and Nathaniel has a more simple looking truck.

“I love to listen to country music while working on my jeep,” Kshywonis said.

“I listen to all kinds of music while working on my truck,” Robinson said. “I pretty much will listen to just about anything,”

There is many unique cars in the parking lot here at Elkhorn South and as new waves of cars are coming in from new students.

“What you drive can say a lot about you it can say if you are laid back or more sporty,” Kshywonis said. “I believe having a strong interest in cars can make high school much more fun if you have a passion for it, I would say start putting your time into it.” 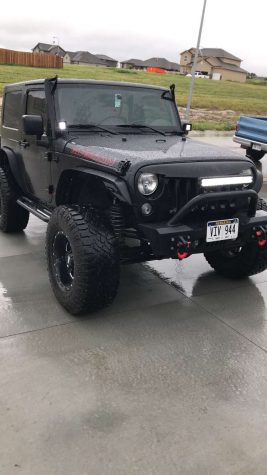