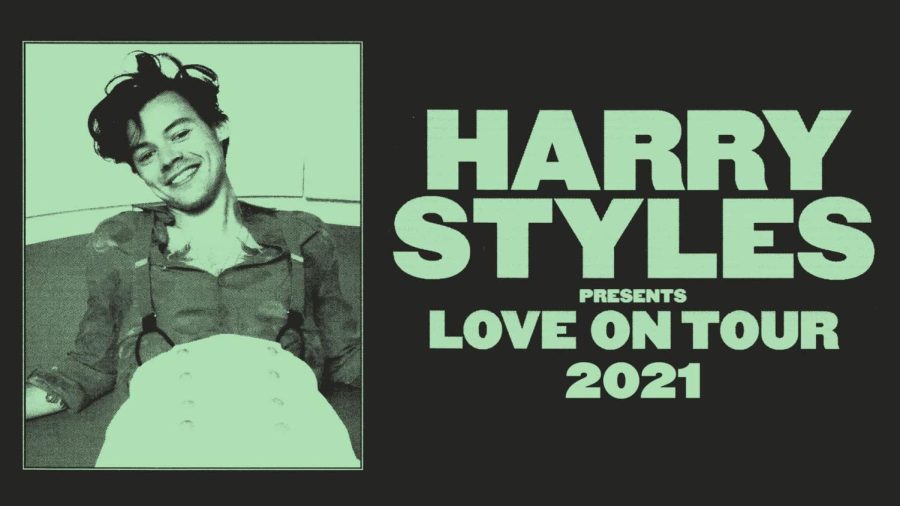 Of the few times I have been to Midway Airport for flight layovers, September 25, 2021 was my first step ever taken in Chicago. After landing around noon, I attempted to hail a cab to take me and my mom to our hotel so we could get ready for the much anticipated Harry Styles concert we were going to that night.

During the winter of sophomore year Harry Styles released “Love on Tour” dates. My heart sank in my chest when I realized that he wasn’t coming to Omaha. In the past five years, I have had a terrible record when it comes to concerts. When I was in middle school, my mom had bought the two of us tickets to see Ariana Grande in concert, but she canceled at the last minute to go to Coachella. Then, when Taylor Swift released her Reputation concert venues (I have been to three of her other concerts- all in Omaha) I was appalled to see that my favorite singer of all time wasn’t even coming to Omaha, a place that on every other tour she had performed for two nights.

As I began to scan all of the other dates, I saw that on July 28, 2020, he would be performing in Chicago. After some major persuasion, my mom finally agreed to buy us tickets. I was thrilled, but then I realized that we wouldn’t be able to pick out seats together because they went on sale during the school day. I sat in math class during third hour anticipating where we would sit as my mom texted me to say that she had been stuck in the queue for two hours. At the end of sixth hour I finally heard from her that she bought seats in section 106, row 5.

I couldn’t wait to be back in an arena again, singing my heart out, but then COVID-19 struck. The concert got rescheduled for over a year later: September 25, 2021, the same night as my senior homecoming.

It was a burdensome decision considering we didn’t have a homecoming junior year. I went back and forth, weighing out the pros and cons of both, and ultimately decided that this concert was an opportunity I might not get again, plus I already had my outfit all planned out.

Upon arrival, my mom and I had a few hours to burn before we had to leave for the concert at 7:00 p.m, so we took showers and got ready.

We got to the venue at 6:00, hopping in line to get some concert merch to commemorate our time of finally being able to go to a concert again. We also decided to get some water bottles because if we were going to be screaming our hearts out for three hours straight, we would definitely need something to keep our voices from dying. Immediately upon stepping into the arena, I realized how close our seats were- we were directly outside of the pit and the stage was built so that Harry Styles had a platform to walk out on that was less than 20 feet away from where our seats were.

I was freaking out and thanking my mom with every part of my being. I couldn’t believe that after all the crap that had gone on, we were finally here, about to jam out to one of my favorite singers.

As 7:00 came and went, we wondered where the opening act, Jenny Lewis, was and when the concert would be starting. We were surprised to realize that the arena was not even half way full. I made a joke to my mom that the concert didn’t start till 8:00 and that we were just two hours early. We looked at each other in panic and checked our tickets online. Sure enough, the concert wasn’t set to start until 8:00.

After an hour of waiting, Jenny Lewis came out to perform and she was fantastic. Her voice and songs reminded me of Fleetwood Mac. Even her hair and outfit gave off the vibe that she was a time traveler from the 70s.

Around 9:00, Lewis said her goodbyes, and the arena went dark and started playing One Direction songs. Fans were going crazy and at one point the whole arena was doing the wave. Then, the most anticipated arrival of the night, Harry Styles, came out singing “Golden” – a single from his album “Fine Line.”

The arena was on fire as Styles continued to perform throughout the night to all of his songs from both of his albums, including “To Be So Lonely” – which he had not yet sung on tour, as well as a song that he sings exclusively on tour – “People and Bananas.” He also went around the arena looking at fans’ signs and trying to persuade a girl’s boyfriend to propose after seven years.

Styles did an incredible job of giving all sides of the arena a show as he changed microphones to be able to perform all around his diamond-shaped stage and the platform that came out on the two longer sides.  During my favorite song of his, “Falling,” he came out onto the platform directly in front of our seats and did not move for the whole song. Fans had their flashlights swaying back and forth as Styles serenaded the audience with this mournful tune about not being good enough for the person you were with. I swear that at one point during this song I locked eyes with Harry Styles and I will live by that fact until the day I die.

Styles rounded out the concert with his song “Kiwi” which had the whole stadium on their feet serenading the singer in return.

The whole dynamic was incredible from the intricate lighting, to the big screens, to the fun and safe energy from everyone in the arena. I can say with 100% certainty that I have never been to a concert like this before with such nice people- from complimenting each other’s clothes to offering to take other people’s photos without being asked.

The concert as a whole was an awesome experience and Styles, along with his band, made the concert worth the two year wait.