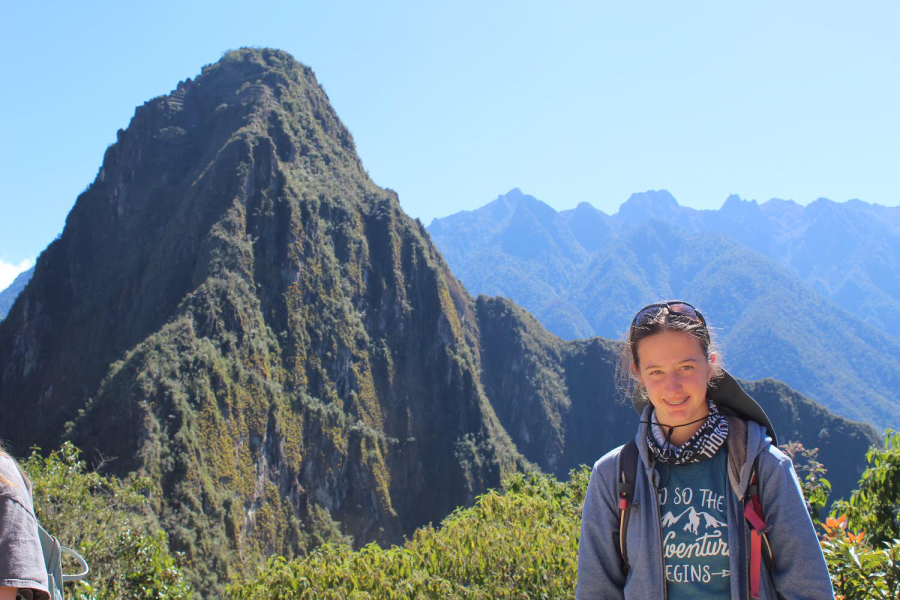 A lot of us grew up thinking of orphanages as something from a fairytale, like in the musical Annie, or in some of the books we have read. We rarely stop to think about the reality of orphanages in helping to educate and take care of children in need, and the selfless people who devote their lives to running them. But for Junior Grace Dondlinger, that’s what she has always dreamed of doing; to make a difference in the lives of those in need.

A lot of people know Dondlinger for the fact that she lived in Switzerland for a lot of her life. But Dondlinger doesn’t differ from her peers just because she lived abroad in her past. She wants a future few plan on as well: to start a school or orphanage for children in need.

“When I was about eight at school we were donating to an organization that was helping young orphans from Africa who were in poverty, helping them go to school and get an education, and I realized that this girl running the organization had the same name as me, her name was Grace, and I thought, ‘that could have been me, I could help them.’”

Dondlinger moved to the United States her freshman year of high school after living in Switzerland for the last 8 years of her life. Born in Nebraska, Dondlinger and her family moved to Switzerland when she was 6 for her dad’s job. Donglinger said that they were glad to be closer to their French side of the family. In Switzerland she got to experience a childhood and education very different from life in the United States.

“I went to an international school, so I met a lot of different people from all around the world there and that was really cool,” Dondlinger said. “I had friends from Japan, England, India, Ireland, and Poland. It really brought in the cultural aspect of all different countries.”

After living in Europe for most of her life so far, Dondlinger and her family packed their bags to return to the United States. It would be her first year of high school, and she had no idea what American school would be like.

“It was like the American movies,” Dondlinger said. “ At my old school, we had a british uniform with a blazer and ties, and I get here, and you’ve got people wearing sweatpants. And I was like, cool, I don’t have to wear a uniform anymore!”

When Dondlinger got to Elkhorn South, she started cross country, and that was her first day meeting people from America who were her age. She didn’t even need to introduce herself to anyone- most people already knew who she was.

“The coach introduced me saying ‘She’s from Switzerland’ so I’m guessing the word spread around the school somehow because when I came to TA, everyone started talking in hushed tones about Switzerland” Dondlinger said. “So that was interesting, I didn’t even know them and they knew me.”

Dondlinger’s international travels have helped to build up her values that inspired her passion for wanting to help children in need. Because of her time abroad, school and learning has always been super important to Dondlinger. She is already fluent in French, and wants to study even more languages in college. For as long as she can remember, she has always had a love of reading and learning new things, and she wants all children to be able to experience that.

“When I moved to Switzerland I was behind on my reading and writing so I had to read all the time, but I just enjoy the fact that I can just explore new worlds and when I’m reading and I can imagine myself in the scene,”

Dondlinger wants to be able to help children because childhood was a time in her life that she really appreciated. As a kid she spent her time doing all sorts of fun things, like skiing, sports, and climbing trees. She wants all children to be able to have a good childhood that they can remember and cherish.

“Childhood is really important to me because that’s when you learn fundamental concepts about life, and you can have fun and you don’t have any stress. It was a time that I could have fun and be imaginative, ”

Starting an orphanage seems like a daunting or impossible task to some, but Dondlinger doesn’t let that discourage her. She has plenty of good friends to support her and believe in her. One of her friends even helped her to come up with a name for her orphanage: Home of Grace.

“My friends have definitely helped me,” Dondlinger said. “And the fact that they actually think that it’s achievable for me to do that has really encouraged me.”

Dondlinger has always wanted to make a difference, whether that be through something big, or just in some small way each day.

“I used to think even when I was little, ‘if I could make somebody else’s day, even if it would make my day worse, I would gladly do it,” Dondlinger said. “So that’s what I’ve tried to live by.”

Dondlinger’s friends have described her as an amazing and fun person who cares about others. Junior Lexi Kaffenberger, one of Dondlinger’s good friends, said that she is inspired by Dondlinger’s aspirations for what she wants to achieve, and that she believes that it is because of Dondlinger’s ambition that many of her dreams will come to pass.

“What inspires me about Grace is her optimism and her love for life. She has such a longing for adventure and to try new things and is wonderfully unique in every sense of the word. Just when you think you have her figured out, she surprises you with a new and interesting fact about herself that makes you fall in love with her character even more!”

Dondlinger also finds a lot of inspiration and encouragement from cross country. Being a part of a team has helped her to make lots of friends, and also to see that there are no limits to what she can accomplish with the right mindset.

“It’s given me a lot of friends, and it’s also shown me that if you think you can do something, you can, and cross country really shows you that that’s actually really true,” Dondlinger said.

Dondlinger has already had so many adventures in her life already, but high school is only the beginning. Her dreams and ambitions to help others have inspired so many of her friends and peers, and her passions to help other people have motivated her to dream big for her future. It’s undeniable that her dreams will help countless people.

“Dream all you can. It doesn’t matter if people don’t agree, if you’re passionate then still pursue that dream all you can if it’s what you want to do.”