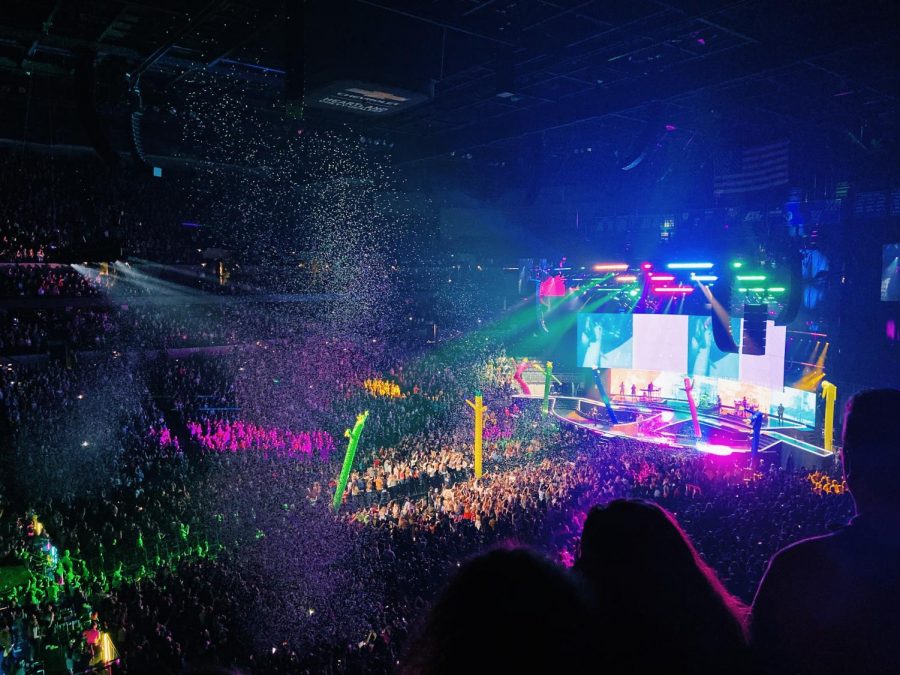 The end of the decade is nearing and people are diving into all sorts of nostalgia from their childhood. With Disney+, 2010’s playlists, and, best of  all, the reunion, new album, and headlining tour of the Jonas Brothers after breaking up in 2013. With the announcement of their coming to the CHI Health Center in Omaha on December 4, people of all ages in close proximity headed to the digital ticket booths and bought a pass back to their childhood. A time machine, if you will, but it’s not headed to the year 3000, but bringing 2009 to 2019.

Months before Joe, Nick, and Kevin boarded the plane for Omaha people were counting down the days until the show, as tickets when on sale back in the spring. The tickets, for me,are the only complaint. At a price of $96, after fees on purchasing websites, you could get a seat in the upper bowl of the arena, with prices only increasing as you made your way closer to the stage. At the time, and even now, it still seems like a fairly expensive concert, but afterwards, I feel like the cost was definitely worth it.

When the show started. Jordan McGraw took the stage, 33-year old son of Dr. Phil whose career started with rock band Stars in Stereo before going solo in 2015. After his 35 minute set, Bebe Rehxa came on for her 35 set, singing hits like “Meant To Be” and “I’m a Mess”. Both openers utilized the whole stage and background dancers to engage the whole crowd, despite where they were seated.

Waiting patiently for the Jo Bros to hit the stage, the DJ kept the crowd’s energy up playing universally known songs like “Sweet Caroline” and throwback hits like “Hit Me Baby One More Time” by Britney Spears, only adding to the flashbacks of childhood. Finally, the lights went down, the crowd roared, and Joe, Nick, and Kevin took the stage.

The first song of their set was “Rollercoaster” off of their new album Happiness Begins as they came down from a suspended platform above the stage, only the first of many well executed special effects and stage features. The song was the perfect start of the show; despite being off of their new album, it’s about their comeback and each new step in their journey is just getting better than the last. Following the kick off, they broke out one of their hits from 2007: “S.O.S.”.

“Cool”, “Only Human” and “Strangers”, also off their newest album, followed, as well as their newest holiday single “Like its Christmas”, where they broke out their Santa hats and fake snow machines. “That’s Just the Way We Roll”, another OG song of theirs, ended and they headed down the center of the arena to their second stage on the other side of the floor.

Once hitting the stage, they serenaded the crowd with “Hesitate” and then “Gotta Find You” from “Camp Rock”, which really sent nostalgia throughout the audience. While they sang, the stage became a platform, slowly rising with slow revolutions as crew members launched programmed “balloons” that moved around them.

After the song ended and they were back at ground level, they took the time to highlight Nick and Joe’s solo careers with Nick’s “Jealous” and DNCE’s “Cake by the Ocean”. Confetti cannons and Air Dancers, or the wavy, blow up guys,  around the floor brought the party spirit alive during Joe’s song before Kevin rejoined them and they continued their songs.

“Comeback” and “I Believe” off of their new album’s are clearly hits, but the end of their show was filled with their oldies for the long time fans. “Mandy”, “Paranoid”, “Got Me Going Crazy”, “Play My Music”, “Hold On” are just a few of their original songs that they played before bringing out their all time fan favs.

Four last songs captured the hearts of everyone in the crowd. “Lovebug”, “Year 3000”, “Burnin’ Up”, and “Sucker”. There’s really not much to say but wow. With fireworks on the drum beats of “Lovebug”, and fire on “Burnin’ Up” the brothers did all they could to make their show an experience, and nothing less.

All in all, the only thing that the Jonas Brothers have done to disappoint fans is breaking up in the first place, but all is forgiven with the return of the iconic group as the new decade approaches. If you’re a “Sucker” for concerts and bands that have made a “Comeback”, or have some cash “Burnin’ Up” in your pocket, take a trip, some friends, or even your “Lovebug” and see the Jonas Brothers in concert. It really is where Happiness Begins.